Dr. Nadia Urato with Dr. Bethanee Schlosser at the Massachusetts Academy of Dermatology 9/20-9/22

Dr. Nadia Urato with Dr. Bethanee Schlosser at the Massachusetts Academy of Dermatology 9/20-9/22 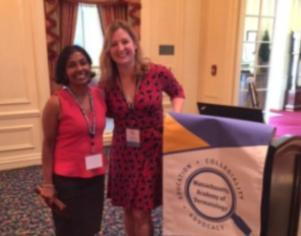 Some Highlights from the Annual Meeting of the Massachusetts Academy of Dermatology this Weekend held in New Castle, NH

Changing moles in pregnancy should not be ignored! At the annual Massachusetts Academy of Dermatology meeting this weekend (Sept 21, 2019), Dr. Jane Grant-Kels of the U Conn reviewed the important studies emphasizing that changing moles in pregnancy should be evaluated and not just assumed to be normal changes in pregnancy. There have been many myths regarding moles and melanomas in pregnancy, but it is important for people who have atypical moles or if they notice changes in their moles to have them evaluated by a dermatologist to see if they may be melanomas or dysplastic pigmented lesions. These moles can be evaluated with a special instrument called a dermatoscopy and/or biopsied safely during pregnancy for further assessment. The increased use of tanning beds has increased young women's risks of skin cancer markedly in addition to changing clothing practices and exposures to the intermittent sun- all things that contribute to an individual's cancer risk. The most common reason that melanomas are noted to be thicker in pregnant women is because of a delay in diagnosis.

Vulvar Dermatoses Deserve Attention and Examination. Dr. Bethanee Schlosser, from Northwestern Medical Group in Chicago, IL reviewed important vulvar dermatoses that women are often reluctant to discuss and bring up to their physician. The embarrassing itch or rash “down below” or the “painful intercourse” are often symptoms of conditions that dermatologists are able to diagnose and treat effectively. Dr. Schlosser reviewed some very treatable conditions that often present as itch, pain, and/or discoloration of the labia, public, and perianal area. These include lichen sclerosis, lichen planus, allergic contact dermatitis, and inverse psoriasis.

New Treatment option for Kids with not well-controlled Eczema or Atopic Dermatitis! Dr. Brittany Craiglow from Yale discussed Dupixent (dupilumab) at a dinner sponsored by Genzyme the dramatic changes that she has seen in her pediatric dermatology patients who have stubborn eczema/ atopic dermatitis that she has started on Dupixent which was recently FDA approved for children twelve and older. The treatment has a very low side effect profile and has no lab monitoring requirements and can be a treatment option for people (adults and kids) who would like more aggressive treatment for their skin condition that doesn’t have adequate control with exposure and lifestyle modification, moisturization, and topical medications (topical steroids or topical calcineurin inhibitors or crisaborole.) The treatment consists of a self-administered or physician-administered injection typically to a fleshy area of the thighs every two weeks. Note: this dinner meeting was not sponsored by the Massachusetts Academy of Dermatology

Find us on the map